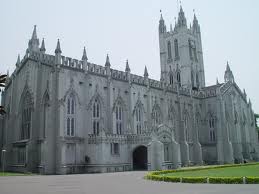 This is St Paul’s Cathedral, Kolkata [Calcutta] where I hope to preside and preach on Sunday week. We’re in the process of putting together a Companionship Link between our diocese and the Diocese of Calcutta. I’m going next Tuesday for a five day visit with two others from the diocese. I’ve had the injections and am well into the malaria stuff.

Meanwhile, after the excitement of the Argyll Consecration – fairly remarkable photograph, don’t you think – I’ve had all the thrills of a day of Provincial Standing Committee and two days of College of Bishops. Sometimes it is all overwhelming! But some things are, I think, better than they used to be. Agendas are less inclined to over-run their time. There are some [very] slight signs of a thaw on the ecumenical front. But let’s not get too excited for now ..

4 Responses to Preparing for Kolkata