The Church Times asked me to write briefly about John Hume who died yesterday. It will take generations to bring Northern Ireland to the point where it is at peace with itself, its painful memories and its history. But the contribution of John Hume and his generation was get to a point where the history and the memories were no longer costing lives. Many of us would regard that as more than we ever expected to see in our lifetimes – John Hume was one of the major figures who make that possible

Never a showy or a band-standing politician – John Hume’s intelligent leadership and dogged persistence were central to Ireland’s long march away from violence and towards peace.  The most intractable conflicts across the world are those which feed on a tribal mixture of religion, politics, identity and painful memory.  John Hume’s example in Northern Ireland showed that even these conflicts can yield their toxic power to determined and long-term efforts in the cause of peace.

I left school at 18 in Belfast in 1969 as the Troubles were beginning.  I was 46 when the Good Friday Agreement was signed.  Through all that time and beyond, John Hume gave hope to my generation that better times might come.

The first was that he internationalised the conflict.  Irish-America, through agencies like Noraid, tended to support a romanticised version of the conflict.  John Hume cultivated the friendship and respect of key Irish-Americans like Edward Kennedy and the friendship of Bill Clinton.  Their involvement in the movement towards peace was to be of fundamental importance.

The second was the Hume-Adams talks – John Hume’s effort to make a pathway for Sinn Fein and the IRA away from politics through drawing Gerry Adams into talks.  He knew that such a process would be messy and that he would be accused of compromise with violence.  But he knew and taught us all that, however costly, such processes are absolutely necessary.  For John Hume and the SDLP, the cost was the growth of Sinn Fein as a political force which came to eclipse their own party.  Such personal and political sacrifice are rare and precious. They were the essence of the political capacity and the spiritual depth of a truly remarkable man

Posted in Uncategorized | Comments Off on John Hume

A blessing and not ..

Why has it taken me so long to get into Podcasts? After all they provide what is missing from much of mainstream reporting – a chance to explore a subject in some depth and often with one of the ‘behind the scenes’ people rather than one of the main actors.

Spotify helps too – and it happens that the length of time it takes me to drive from home to St Peter’s, Lutton Place, in Edinburgh where I remain for the time being as interim pastor is exactly the length of the average podcast.

So this morning I listened to a New York Times podcast which featured Chris Hughes who is a Facebook co-founder and a college room-mate of Mark Zuckerberg. He said some interesting things – chiefly that he didn’t necessarily agree with the proposition that putting people in touch is a self-evident good. He questioned the power – and in particular the monopoly power – of Facebook and suggested that it was time the company was broken up.

It’s been clear to me for a long time that the internet in general and Facebook in particular puts power – of a kind – without any accountability into the hands of literally anybody who has a keyboard. That’s where internet abuse comes from and I’ve experienced my share of that in leadership.

But of course there is always another side. In the middle of a stream of photos and comments on Alison’s 50 year school reunion in Dublin last weekend was a comment from somebody who wasn’t part of it – asking about my paternal grandfather in ministry in Kilkenny. Her father was the joiner and cabinet maker who made some furniture for them and ecclesiastical furniture for the Cathedral. Yes that’s the back story of the monk’s bench in our hall and the simple Celtic Cross which is also there … And while I knew that story as a piece of ill-defined family history, it was Facebook which put me directly in touch with it.

Posted in Uncategorized | Comments Off on A blessing and not ..

If you are old enough to remember Rowan and Martin’s Laugh-in, you will recall the dread fate of being stuck in a lift watching old Tony Curtis movies. I doing a bit of re-ordering old sermons at present – and I get the same kind of feeling.

Vocation and Ministry Sunday turns up regularly – but it would never have occurred to me to explore the idea that a congregation has a vocation.

I’m still acting as Interim Pastor at St Peter’s, Lutton Place. This is the sermon from this morning and it explores that theme

Good Friday Thought for the Day

Time I uploaded a sermon. I’m still acting as Interim Pastor at St Peter’s, Lutton Place, in Edinburgh. This is the Sermon from yesterday – with thanks to Giles Fraser for his piece in Saturday’s Guardian and to Martyn Percy for his tweets throughout Holy Week

A thought in the midst of Brexit

Another Thought for the Day in the Brexit turmoil.

John the Baptist strikes back

Interim Ministry is a strange thing – it’s seven months now since I went to St Peter’s, Lutton Place, in Edinburgh.  It wasn’t an easy moment and I had some fairly difficult times at the beginning.  The Annual General Meeting was particularly memorable.

Interim Ministry isn’t really just about filling a space until a new appointment can be made.  It uses the space as creatively as possible – partly to calm things down and partly also to provide the best possible starting point for the new ministry which will follow.  That’s the John the Baptist bit – always having an eye towards the one who is coming.

I have quite enjoyed undertaking a series of development initiatives at about three times the speed which one would approach the same things in a long term ministry.  But there is very little at stake for the Interim Pastor.  I can revert to the retirement armchair any time.

At the moment I’m enjoying running some ‘Looking to the Future Groups’ – twenty five people have volunteered to take part in two groups.  We are looking at – call it what you will – the future of the congregation or the vocation of the congregation or the beginnings of a mission plan.  Of course I won’t have to turn any of this into policy and attempt to do it.  But I think the material which comes out should go into the Congregational Profile so that ‘the one who comes after’ can see that the congregation is ‘up for this’

But this is a sort of high speed ministry.  And after seven months, I’ve probably now done most of what I can.  People have responded well and have be prepared to journey with me. And I have learned a lot too.

Another Sermon from St Peter’s

I said that I would preach two sermons about the issues facing this – and every – congregation.  This is the second and it is about the challenges of decline and growth

Looking to the future at St Peter’s

I’ve mentioned before that I am doing a period as Interim Pastor at St Peter’s, Lutton Place, in Edinburgh. As a congregation, they have had some difficult times and feelings run high. I’ve been doing quite a bit of listening – but the time has come now to begin to shape future direction.

So this is the first of two sermons which I am preaching – one about faith and the other about growth.

Here is the sermon 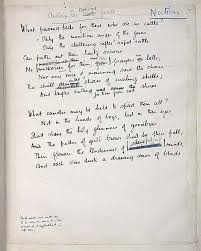 I was back in St Peter’s, Lutton Place, in Edinburgh this morning – as I am about two Sundays a month during my time as Interim Pastor.

We used Wilfred Owen’s ‘Anthem for Doomed Youth’ as they did in the Festival of Remembrance in the Albert Hall last night. I am one of the most unmilitary people you could meet – but I find today always deeply moving.

Read the sermon and you’ll find out why

Posted in Uncategorized | Comments Off on Remembering ….