So now that things are beginning to settle down a bit, I need to go back and fill in some gaps from the last few months. it’s been a significant and important period.   And then I’ll reflect a bit on future blogging

But for now … House renovation is under way and we are busy. I’ve been aware for some time of the sermons of my grandfather, Ernest Bateman. They are being used by a group of historians in Cambridge led by Professor Eugenio Biagini as an important contemporary source in the study of the minority Protestant community in Ireland after Partition.

We are off to a family wedding down south this week. The car is weighed down with six decades of Uncle Artie’s diaries – also heading for Cambridge.   It’s a solid hard backed book for each year and written in a microscopic script 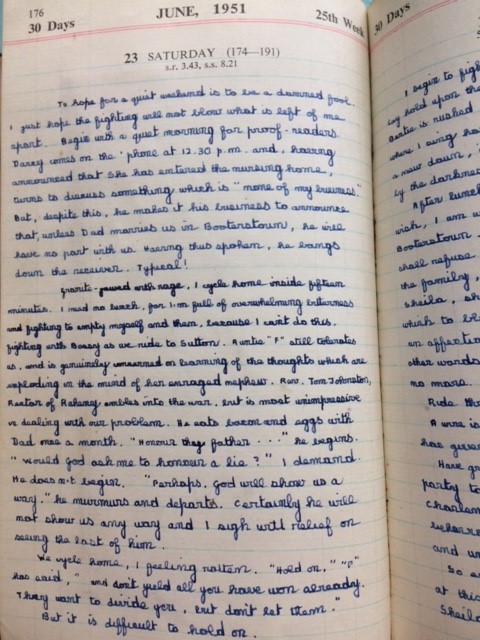 I did a ‘test drilling’ to see what he had to say on the day of my birth and found a family swirling around me.  Obviously starting as I meant to go on.  I wasn’t a bishop at that point but I was already a proxy for other people’s arguments

So I am gradually realising that I belong to one of those families where nobody ever had an unrecorded thought – and I am as guilty as the rest.  And out of all this – and my more recent experience – will come something …

1 Response to Moving on. #pisky