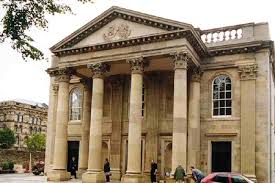 On Sunday, I found myself back in the Parish Church of St George as part of their 200th Anniversary celebrations. I don’t do much of going back to where I came from – even though those who know me are used to the fairly constant internal dialogue which goes on in my mind. I joined the choir here as a teenager in 1967 – my father was Secretary of the Vestry for a long time – and the parish lived through the bombing campaign in central Belfast. The church was constantly and seriously damaged and they just kept on going.

It’s an interesting and unusual place mainly because it is one of the very few churches of catholic churchmanship in the Church of Ireland in Northern Ireland. In 1967, I was there for the music and the music kept some kind of faith flickering. But in God’s greater economy, it was obviously a preparation for my future appearances at All Saints, St Andrews.

I find it quite difficult to make the various connections in these circumstances.But this is my attempt in the sermon

The last media contact in the midst of Friday’s meeting of General Synod came from BBC Radio Ulster looking for an interview for their Sunday Sequence programme. So I ended up in their studio in Belfast on Sunday morning attempting to explain what our General Synod had decided. That in itself was interesting because Northern Ireland is the only part of the British Isles where same-sex marriage is not legal. I watched Roisin Mcauley’s eyes widen as I explained what we had decided.