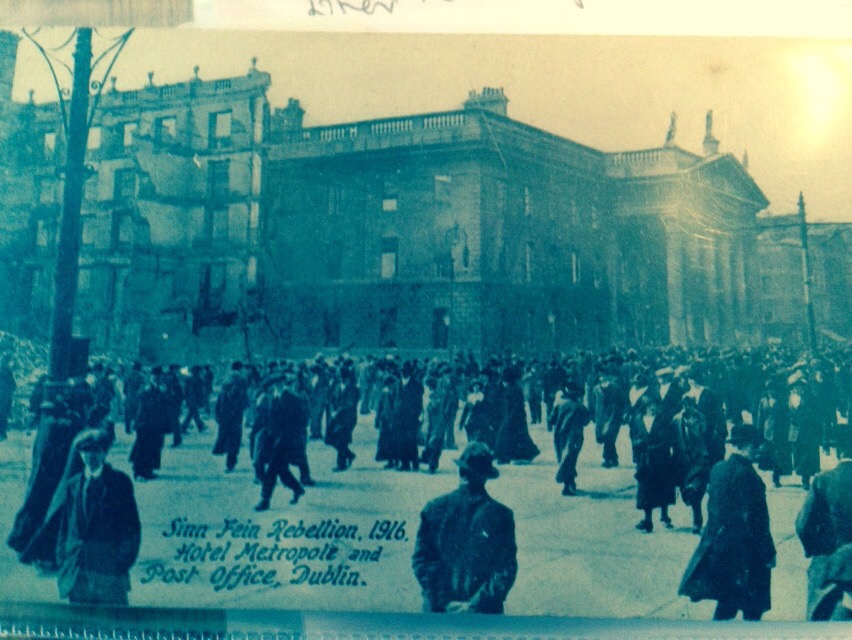 Alison has been doing some sorting out of the family archives – and came across this contemporary postcard of the 1916 Easter Rising,

It happened a mere 35 years before we were born – both of us remember the 50th Anniversary.  My grandfather, Ernest Batemen records his memories of it in one of his sermons.

The commemorations seem to have taken a more rounded view of the significance of the Rising – national pride of course.  But the other stories have had an airing as well.  Those include the fate of the WW1 veterans who came home – as veterans often do – to a world utterly changed.  And the Civil War – and Partition.  I’ve been reading about the hopes of some – particularly James Connolly – who hoped for a new state built on values of equality between men and women.  What they got was a Catholic confessional state which was mirrored in Northern Ireland by a ‘Protestant state for a Protestant people’.  And they also got generations of conflict.

Those who contemplate partition – India/Pakistan or Sudan – should learn the lessons of Ireland.   It’s about what happens to the people who are on the ‘wrong’ side of the line.  The Northern Catholics struggled against discrimination in housing and jobs – but increased in number.  The Southern Protestants – the root community for Alison and me – were in many cases prosperous and influential in business.  But they were drastically reduced in numbers.