With the Primates in Cardiff. #pisky 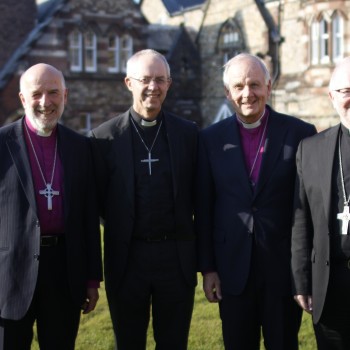 I carried people’s generosity – literally – back with me from Cardiff

There two strands to this visit.  The first was a meeting of the Anglican Primates of Ireland, Wales, Scotland and England.  I think this is the first time such a meeting has taken place.  So Archbishops Justin, Barry, Richard and I sat down together for a 24 hour meeting – joined for part of it by Archbishop Josiah, the new Secretary General of the Anglican Communion.  There was a lot to talk about.  Most obviously there are the challenges of the Primates Meeting which is due in January.  But there is no shortage of other things to talk about – poverty, migration, Europe, religiously-motivated violence, devolution ..
We also went as a group to a dinner hosted by the Muslim Council of Wales – hence the challenge of slipping a substantial cut-glass bowl into my carry-on bag.  It was a fascinating and impressive evening.  I got the feeling of a significant part of the community in Wales – increasingly self-confident – and generous too

We have much to learn