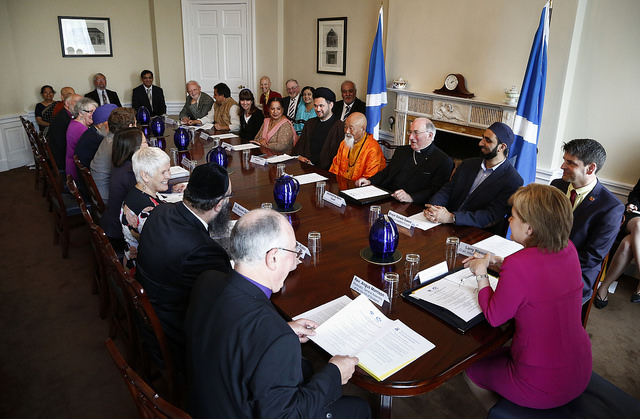 It was a remarkable expression of the diversity of Scotland – an invitation from the First Minister to the leaders of Scotland’s faith communities to sit around the Cabinet Table at Bute House and have a conversation with her.

It’s easy to dismiss this kind of gathering as a ‘nodding and smiling’ event.  The reality is very different.  Relationships among the faith group leaders are strong and there is well-established infrastructure such as Interfaith Scotland and Scottish Inter-faith Week.   We aren’t starting from the beginning.

The First Minister was remarkable.  I think her commitment to this meeting stems from a recent visit to a synagogue in Edinburgh.   She successfully called everybody by their first – let’s not say Christian name – and people talked about things which were important to them

What did I take away from the meeting?

One was a shared concern.  It’s easy to say that faith communities represent significant social capital – but it is the common experience of all of us that it is very difficult for faith communities to access external funding – particularly statutory funding,   There are many examples of this.  But the most obvious example is the fact that the Sikh community are stretched by their commitment to feed the community.  That’s a huge commitment – particularly in the west of Scotland in a time of austerity.  Some funding support would be a life line for them

If you want to know what the First Minister thought about it, you’ll find it here