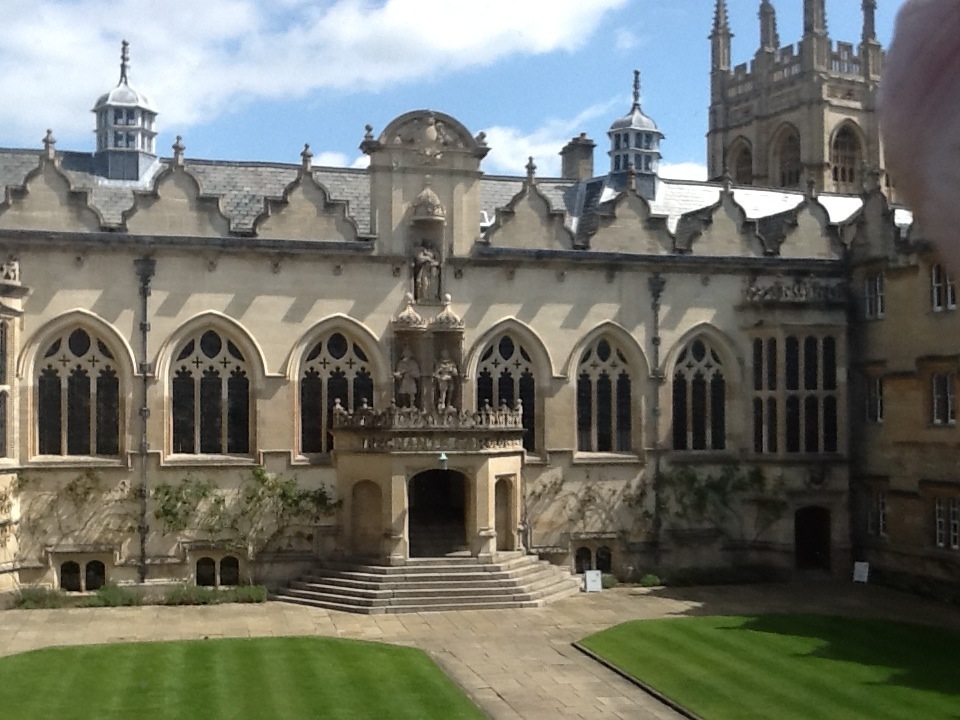 Another of my series of ‘View from,the bedroom window’. This is the Front Quad at Oriel College, Oxford, where I came to read theology in 1973. I’m here to speak at the Oxbridge OG (Old Glenalmond) Dinner this evening.

Meanwhile I’m still thinking about the reaction of people to the feel of the Institution Service in Kirkcaldy earlier in the week – and I think they were reacting to some kind of balance of formality and friendliness which they hadn’t quite met before. Another visitor to my Office yesterday talked about the way in which the new confidence of the congregation communicated itself.

I had a related conversation on my way in to celebrate the Eucharist in our Cathedral on Wednesday morning. We talked about the formally Catholic and somewhat austere face of the SEC 50 years ago – the celebrant once vested would not engage in conversation of any kind. We aren’t like that now. And yet without some kind of formality it doesn’t work.

And finally we ended up at another of the wonderful series of Beethoven String Quartet Concerts in Perth Concert Hall given by the Michaelangelo Quartet. I slept soundly through almost the whole of Op 18 No 6 – which is a pity because it formed part of my musical youth – but was wide awake for the savagery of the Grosse Fugue. It is of course an activity closely related to worship – listening, sensitivity, discipline, pace, silence. The star for me was the Cellist – who I think has more notches on his bus pass than I have, He does that magic thing – which worship needs too – of being the rock solid rhythmic and tonal foundation of the Quartet while playing in a way which creates more space for everybody than really seems to be there.