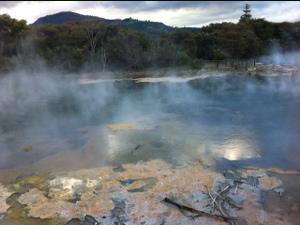 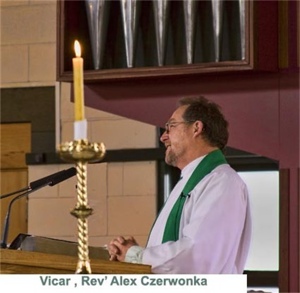 We have just spent the weekend in Rotorua. It’s about 200 miles south of Auckland and it is famous for its geothermal springs and boiling mud. There was a certain satisfaction for me in seeing the hot springs and geysers in Iceland and New Zealand in the same year.

This was strange – clouds of steam rising behind the hedge beside the road – a pipe venting superheated water just beside the car park – a distinct smell of sulphur wafting into the church during morning worship.

We were with the Vicar of St Luke’s Church, Revd Alex Czerwonka and his wife Jocelyn. It’s hard to say that it was very different from what I see most Sunday mornings – more ethnically diverse. But the attractions of that were that it was almost like but not quite. And it’s the not quite which is interesting.

Some of the other local clergy and their people joined us for a congregational lunch and we did some serious talking about mission. They are much better than we are at social outreach – lunch clubs and thrift shops. Their equivalent of Casting the Net and Mission Action Planning is ‘Missional Mapping’ and I think we may have been a little more developed in that. What was particularly interesting was their pattern of local shared ministry – under the oversight of somebody called the Bishop’s Chaplain but really more like an Archdeacon. That’s a pattern which we are exploring in Argyll and Moray – small congregations with their own indigenous ministry with a stipendiary priest exercising oversight of a number of congregations.

There is nothing better than getting out of a conference and meeting the local church. We really enjoyed it.