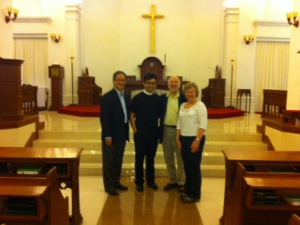 This is All Saints Cathedral in Hong Kong. As we have connected with the local church here – and had lunch today with Archbishop Paul – I remain amazed at how similar Anglican churches are everywhere in the world. It’s there in the worship, in the culture and – this is one that isn’t so obvious – in the governance.

Which brings me to the meeting of the Anglican Consultative Council (ACC15) which is only another five hours of jet lag away in Auckland. And that in turn raises the question of what holds the Anglican Communion together – given that we delight in not having any tooth-endowed centralised authority nor any single teaching magisterium. Indeed, if we attempted to do either, I can be sure that Scotland would be there to vote it down.

But we do have what are called the Instruments of Communion. You can read about them here
http://www.anglicancommunion.org/resources/acis/docs/unity.cfm

The Anglican Consultative Council is particularly important because it isn’t just bishops and it has some democratic credentials. Indeed I am not even a member since I attend as a representative of the Primates – as does Archbishop Paul Kwong of Hong Kong