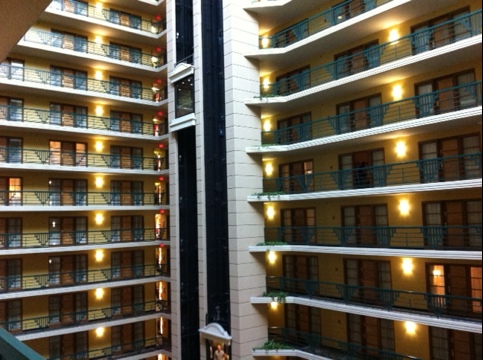 Regular readers will know that I have a great affection for America – rekindled in the post-George W Bush era.

I think it’s something to do with the combination of complete anonymity with a sort of folksy notion that we are all part of some mythical small town or running a gas station on Route 66. So I had breakfast on the ground floor of this astonishing hotel – note the vaguely retro adornment on the glass lifts – and met a group of teenagers on an exchange with the Ulster Project

I like the language – Harold MacMillan’s comment about ‘two nations divided by a common language’ comes to mind. So I was asked within ten minutes of arriving if we had had ‘pushback’ on the Anglican Covenant. Then there’s the constant semi-official use of circumlocutions – of which my favourite is ‘at this time’ for the slightly more incisive ‘now’

Weather forecasts here are a bit of a joke since the weather is always the same – hot – 30C yesterday. But then this whole city is arranged so that you can go all over the place without ever going outside. So what’s the point – apart from the damage to the environment. But then Frequent Flyers can’t say too much about that.

Then there is the food. We are tending to eat less and be more vegetarian. No sign of America going that way.

And finally I had what is remembered in our family as a Vons moment. We were doing a house swap in Pacific Palisades near Santa Monica. Vons is the big supermarket at the end of Sunset Boulevard – I rang up to find out the opening hours. ‘We’re open 24 hours’ was the simple reply. Today I asked, ‘where do I find a cell phone shop?’ – thinking of the little shop on Methven St which unlocks phones and imagining myself in the back streets of Indianapolis. The answer was ‘down the escalator in the lobby and into the Mall – tons of them there.’