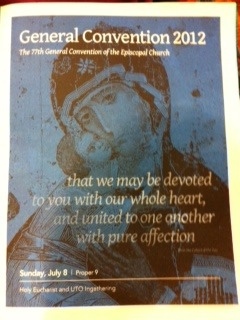 The involvement of visitors from other Provinces in the General Convention came to an end this morning with the Eucharist – a huge event as everything about this event is huge.

One reflects – as I do about our own province – about where it is going and how things are. Morale is good. People are as always warm, friendly and hospitable. There’s change in the air. Historic endowments produce less money than they did. Numbers are down as American secularises. There is talk of restructuring – widespread feeling that this is necessary and inevitable. But less confidence that a way can be found to achieve it.

Some is visible already. The House of Deputies passed a resolution to sell the church’s HQ in New York. No decision about where it might move to – and it requires a similar vote from the bishops. But it would be a significant move to leave New York – a move away from the old Protestant establishment rooted in the North East – maybe toward the new economic centre of America in the South. The liturgy was half in Spanish – and that tells you something as well.

The church has moved on. I saw Gene Robinson – now retired – and Mary Glasspool, suffragan Bishop of Los Angeles – both gay and partnered. And the Diocese of Pittsburg was named in the list of dioceses making a thank-offering. This diocese has been re-formed after the previous bishop led it out of the Episcopal Church. So some of the sound and fury of the past has receded.

I’ve enjoyed it and made a lot of useful contacts. It seems a long way away but it is extraordinary how alike we are and how much the shared Scottish-American history still lives!