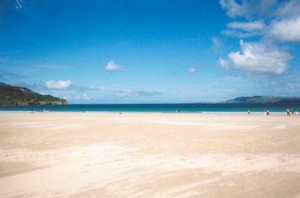 Welcome to St Patrick’s Day – a day for thinking about identity and belonging. I had an early-morning text from Alison who was walking this magnificent beach – Killahooey Strand – in bright sunlight close to Blogstead Na Mara in Donegal. She seemed pretty much at home. Not long afterwards, I was out cycling the lanes of Perthshire around Blogstead – Campmuir, Burrelton, Saucher and the rest. Wave to the farmer getting on with the ploughing .. magnificent circle of mountains all around stretching over towards Angus with little bits of snow still on the tops. I felt at home too.

Irish – with my surname? What they used to call Planters’ Spawn more likely. And like many people in Ireland as it began to grow healthier, I took to giving myself a dual identity. It’s quite common now to say that you are Ulster-Scots – people whose thinking is orientated East-West from Antrim to Ayr. I’m more of a North-South thinker and feel myself to be Irish-British. That’s different from British-Irish. And I don’t find it hard now to say, ‘We in Scotland … ‘ so that’s clearly in the mix as well.

I suppose that’s part of the reason why the whole Six Nations thing passes me by. Not just that I never really – to my parents distress – got the point of competitive team sport. More that I am inherently suspicious of linking it to nationalism. Same problem with the Olympics. Citior, altior, fortior is fine with me – but why link it to national identity? Still one of the more remarkable aspects of Irish life is on view today – apart from the churches, I think that Irish Rugby may be the only organisation which treats the whole of Ireland as one.

But I digress. We dug out the family christening mugs with a view to inscribing one of the old ones for Eve at her baptism in Hamilton in June. I found myself looking at my great-aunt Helen’s christening mug. She was Helen Brookman. I remember her well. She lived in Finchley and was a devotee of Mrs Thatcher. She was clear-minded and warm-hearted – one of the generation whose future husbands were lost in the slaughter of the First World War. Quintessentially English. But turn the mug over and on the bottom it says ‘Helen Bertha Bruckmann’. For the reality is that she was German and her family, like many others including the Royal Family, anglicised their surname before the First World War.

Mongrels all of us. And safer that way.

2 Responses to Touching Base