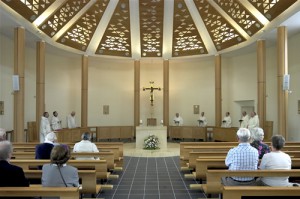 We were gathered in the church at Holy Cross Monastery where I have just been on retreat with the Benedictine Monks in Rostrevor. Monastic Profession of Brother Joshua. First day of the Week of Prayer for Christian Unity. Anniversary of the dedication of the church – for this community sees the ecumenical journey as being at the heart of its vocation.

There was a moment

In Casting the Net, we shape much of what we do around the Nine Marks of Mission – of which the first is ‘Worship which renews and Inspires’. You may remember that I wrote a while ago about what Dom Mark-Ephrem does with the incense. Not so much of what is in the old manuals of catholic practice – more gentle leaning into the candle flame …

As Joshua lay prostrate before the altar, his body was gently and tenderly censed. It was another expression of the words which he had just uttered: ‘and to continue until death’. And then I saw that this was one of those special moments of liturgy which faces both ways and is beyond words. It was baptismal – the affirming of newness of life and the recognising of death. And I thought not just about the dying and rising of baptism but also about the tentative English/Spanish conversation which I had just had with Joshua’s mother about how for a parent this was a very happy moment tinged with sadness.