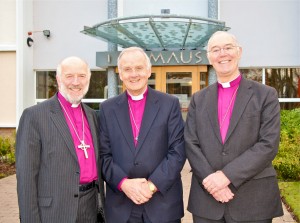 You have probably been wondering why I haven’t got around to saying anything about the Primates’ Meeting. Well it was interesting – and exhausting – even though it didn’t involve any serious travel for me. Here I am with my Celtic companions, Archbishops Barry and Alan.

First of all, I found the opportunities of building contacts and making friends quite extraordinary. It makes a difference – if one is talking about blasphemy laws in Pakistan – to be sitting beside Bishop Samuel Azariah of the Church of Pakistan. Far off places suddenly become very close. And that’s what Communion is about.

Secondly, I felt keenly the disappointment of not being with those who had decided that they could not be part of the meeting. It was my first Primates’ Meeting. I felt the poorer for not hearing what they had to say and having the chance of discussing with them.

But it was still a good and worthwhile meeting. As the statements make clear, the Meeting spent much time clarifying the role of the Primates’ Meeting as one of the Instruments of Communion. It should not be a place where decisions are made for the Communion or for Provinces. It was clear that most of us come – as I do – from Provinces where decision-making is collegial and consultative within our autonomous provincial structure.

So when our College of Bishops meets next week, my colleagues will not expect me to bring back a series of decisions for implementation. But they will want me to share with them the best account I can give of how other Provinces are dealing with the same problems as we face. That won’t just be an account of how far-off places are doing – because through the Instruments of Communion we expect to respond to the feelings and the difficulties of other Provinces. As they respond to us. That’s what it means to be a Communion.