Last of the Autumn 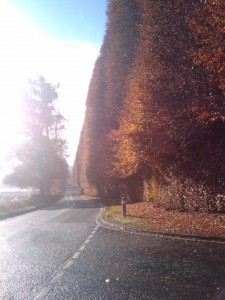 We’re in the last of the Autumn here – 0.5C this morning. This is the world-famous Beech Hedge at Meikleour – about two miles from Blogstead.

The story is of course about Jacobites …

The story of the hedge is closely associated with the story of Meikleour House, which lies half a mile to the west and whose eastern boundary it defines. The house was built by Robert Murray Nairne and his wife Jean Mercer of Meikleour, heiress of the estates of Aldie and Meikleour, who had married in 1720. The house itself was remodelled into the form of a French château in 1870, but by then its most outstanding feature was already well established.

The Meikleour Hedge was planted by Robert and Jean in the autumn of 1745. However, as Jacobites sympathisers, they would never see it grow to maturity. By the time the hedge was planted, Bonnie Prince Charlie had been on Scottish soil for over a month. The 1745 Jacobite uprising came to a decisive end at the Battle of Culloden on 16 April 1746. Amongst the Jacobites killed in at Culloden was Robert Murray Nairne, and following the battle Jean Mercer left Meikleour to seek refuge and anonymity in Edinburgh.