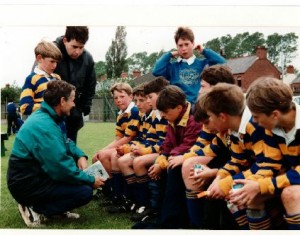 The news creeps up on you gradually. A text from our Mark – the edges of some news reports. Someone from Portadown has died in Afghanistan And gradually it becomes clear that it is Neal – one of the three killed by a renegade Afghan policeman whom they were training.

Neal took the army path after his GCSE’s – school and university and then training. He obviously loved it. He sort of grew up at a different pace – I suppose it made a man of him sooner than the others. He was good at staying in touch – most recently by text and Facebook..

The memories came flooding back – most clearly a picture which is in our house of their Primary School rugby team playing at Ravenhill. And a day we spent with Neal in – of all places – San Diego in 1998. We think about his family – his parents Ivor and Marie, Nigel and Valerie, his cousins and wider family. They will be devastated – but they will be brave. Portadown is famous for many things – some of them not so good. But on the day when you need family, community, neighbourly and spiritual support .. and when you are going to go on needing it … there can be nowhere better to live.

Not the time for questions. Nothing must diminish the value which Neal – and his country – put on the work he was doing, the risks he was running and the sacrifice which he offered. Our thoughts and prayers are with Ivor and Marie and his family.

And the picture – Primary School Rugby at Ravenhill and the team from Bocombra Primary School – Neal is second left on the bench; Mark on the end. All getting the pep talk from Willie Gribben