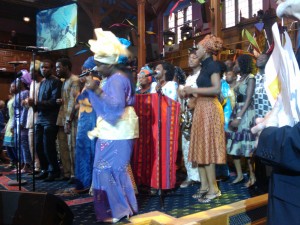 This is the Scottish African Gospel Choir at the closing service of the Edinburgh 2010 Service in the Church of Scotland General Assembly this afternoon. At something over three hours, it nearly lasted into this evening and next year as well – described by John Bell, who was attempting some ‘on screen’ editing, as ‘possibly the longest service in Scottish history. But I doubt that.

Archbishop John Sentamu talked about mission. But the most striking moment was probably when we are asked to sit down by categories – people from Africa, Roman Catholics, women … And the relatively few left standing were told that they were the only ones who were present at the 1910 Conference. We do make progress.